How to Packet Capture on a Cisco ASA Firewall

Monitoring traffic on a network is a powerful troubleshooting technique that most network engineers employ. Today's post will delve into the details of how to packet capture on a Cisco ASA firewall.

The power of the packet capture

Having the skill to capture traffic within a network is essential for any ambitious network engineer. Countless times during my career I've been able to diagnose network issues with this technique.

The most frequent use case for a packet-capture is to debug a connectivity issue between two nodes. Step one would usually involve checking the routing table to ensure an entry exists for both nodes. If the routing looks good but the nodes are still unable to reach each other, it might be time to perform a packet capture - this will allow the user to isolate the location of the issue. Is the issue related to a firewall policy? Does it exist between the nodes or on one of the nodes themselves? Is the problem existent in one direction or both?

Setting up our lab on GNS3

For today's example, we'll set up a Cisco ASAv firewall with a direct connection to a PC on GNS3. Let's begin the setup by configuring an interface on the ASA which will connect directly to our PC. We'll assign the interface a security level of 100 to ensure the firewall doesn't block any traffic incoming from the PC.

Next, we'll configure an interface on our virtual PC with an address of 10.0.0.2/30 and connect it to our ASA.

A quick ping test should now reveal that the two nodes can reach each other.

How to perform a packet capture

Let's now begin capturing all traffic on the INSIDE interface of our ASA with the command below.

In our example, we entitled our capture buffer with the label "pc-traffic". Any phrase can be substituted here.

After another ICMP execution from the PC, we can check the captured traffic with the show capture command.

If at any point you want to check all active captures running in the background you may do so as follows.

Let's now halt our running capture - it's important to carry out this step at the end of each session to conserve system resources.

How to use capture filters

Another good practice is to avoid capturing all traffic on an interface and instead limit the match criteria provided. Not only will this conserve system resources but it also makes it easier to analyse the output by discarding unwanted data.

The example below will only capture TCP traffic with a port destination of 22. This capture filter would be useful for troubleshooting SSH traffic.

How to print captured packets to the terminal in real-time

Instead of viewing the captured packets with the show capture command, we can also view the traffic as it is captured in real-time. Run the command in the output below and then send some TCP traffic on port 22 from the PC to the ASA. You should see the TCP SYN packets captured as they hit the interface in real-time.

How to save a packet capture for Wireshark

Let's now imagine you want to move the captured PCAP data to a desktop for detailed analysis. It's no secret that Wireshark is far more user-friendly than any kind of command-line analysis, so how could you do this? Simply set up a TFTP/SCP server or plug in a USB and move the captured file using the standard Cisco copy command. We'll show an example below for a TFTP server.

Hopefully, these instructions helped your understanding of how to perform a packet capture on the Cisco ASA series. If you have any questions, feel free to leave a comment beneath the post and we'll do our best to help.

You can download a template of the configuration discussed above and import it into your Ultra Config Generator instance. A screenshot of the Packet Capture template in action is shown for illustration. 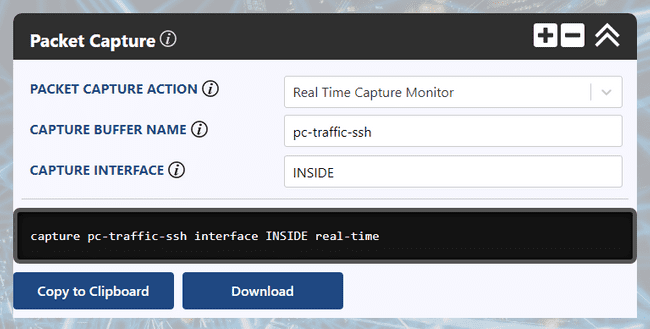 If you haven't heard of Ultra Config Generator, I would highly recommend you check it out. We designed the product to allow network engineers to generate and automate network configuration in a highly flexible, efficient and elegant manner. Our users love the application and I hope that you will too.

Take care until next time!